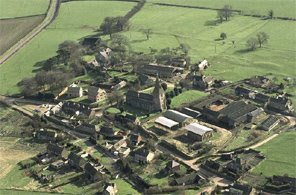 I’ve finally had time to put down my thoughts about Matthew Johnson’s Ideas of Landscape , which I’ve recently re-read. In this book Johnson explores the distinctive English tradition of (primarily medieval) landscape archaeology, which has its roots, or at least is personified in the form of W G Hoskins, author of the Making of the English Landscape. He situates Hoskins as the inheritor of a wider Romantic tradition of writing about landscape; one which he sees as both empiricist and conservative. He argues that the methodology of much landscape archaeology in this mould is undertheorised, particularly in the way in which it goes through the process of interpretation. In Johnson's eyes, for the English landscape tradition the process of understanding field archaeology is unproblematic and essentially a procedure which involves the reconstruction of landscapes using models derived from historic sources. He focuses on what he sees as the empricist inferences behind the ‘mud on the boots’ emphasis on fieldwork and the tyranny of the Cartesian gaze in the use of maps and aerial photographs.

One of my major problems with this book is that Johnson misses the chance to turn his critique on many of the post-processual approaches to landscape. I would argue it is also possible to see the influences of the (Neo-)Romantic landscape tradition running through the phenomenological tradition (e.g. Chris Tilley) and what Andrew Fleming has called the hyper-interpretive approaches (for example in the work of Mark Edmonds). These are characterized by fixing on the experience of landscape (both in the past and by the modern investigator) and an aestheticised gaze. They are as reliant on ‘gut reaction’ as part of the interpretive process as is the English landscape tradition. Andrew Fleming has explored the methodological limitations of these approaches in a couple of recent papers (Camb Arch Journal 16/3 2006; Landscapes 8/1 2007). Because Ideas of Landscape focuses on the medieval landscape tradition, rather than approaches to prehistoric archaeology, which is the main arena for much of these post-processual approaches to landscapes, he misses exploring the more complex relationship between Romanticism and archaeology. In his eagerness to place the blame for all the problems (and there are undoubtedly many problems) with landscape archaeology in England on the Romantic tradition, he fails to see the complexity of this important tradition in British thought and its pervasive influence on archaeology in the UK. He briefly acknowledges the important stream of political radicalism in the Romantic tradition (such as Blake, Crabbe and Orwell)but fails to develop this line. By drawing all his fire on the Romantic geneaology of Hoskins et al, he fails to explore the way in which the empiricist approach to archaeology derives much from the Enlightenment project, which much Romantic thought deliberately set itself against.

As is also common in archaeological critiques which explore the intellectual genealogy and context of other scholars and traditions, the book fails to contextualise itself adequately. I would have liked to see Johnson carry out an element of auto-critique to his own work. Although he mentions his experiences as a student at Wharram Percy, he fails to situate his own work in a cultural tradition. There are hints of his preferences; he prefers the 'naughtiness, travelling, whoring and sharp comment on the social iniquities' of the 18th century to the sentimentality of Romanticism. But it is hard to get a sense of his own personal academic journey, which is a pity, as his own output on post-medieval archaeology shows some interesting biases. For example, he manages to write a book on the Archaeology of Capitalism which hardly mentions industry or industrial archaeology. Is this deliberate? Is there a methodological or theoretical reason for this, or even (whisper it quietly) a degree of anti-modernism in his own scholarship…
Posted by David Petts at 14:32