Owen Paterson and the fine distinction between woods and trees 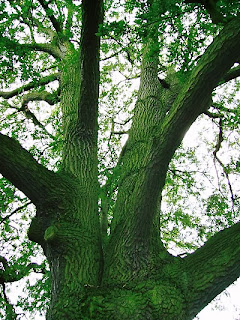 The Torys really seem to have it in for the Ents! In the latest gem from Owen Paterson (Secretary of State for the Environment), we can find him suggesting a policy of offsetting the destruction of ancient forest (ie land which has been forested since at least 1600) through the development process by replanting new forests at a rate of 100 new trees for each old tree uprooted. The general response to this seems to have been: ‘wtf?’.

Now of course, at the very basic level, if ancient woodland absolutely has to be destroyed then of course some kind of basic policy of off-setting or compensation would seem to be the least that could be expected of the developer. However, what is proposed here is more than a simple response to the last resort destruction of a limited and threatened resource, but an active incentive to facilitate such destruction.

There are so many problems here, it is hard to know where to begin, but let’s start with the basics; a forest or woodland is more than simply a collection of individual trees. It’s an ecosystem that consists of trees, undergrowth, flora, flauna and microflauna, all living in a symbiotic relationship with each other, all interconnecting in a complex web of mutual reliance and dependence. This is a system which has developed over time, usually hundreds of years. It is also one which usually closely articulates with human interaction with the woods. Simply planting a new forest somewhere else, quite probably in a different ecological, geological or socio-cultural niche is a not cheap and cheerful way of replicating the dynamic system of an existing ancient woodland, with all its ecological and cultural complexity. Replacing an ancient wood is not simply a case of transferring the gene stock of a group of individual trees; you can’t transfer the long term pollarding or coppicing practices that have sculpted the old trees, you can’t transfer the understory of human activity that helped to mould the ancient woodland landscape (woodland ditches; park pales; saw pits; drag roads etc etc etc).

My first reaction was send Owen Paterson n the complete works of Oliver Rackham. But this is pointless, because much as we would like to think that Mr Paterson is a bear of very little brain, he is not. He may not be the brightest mind in the cabinet, but he is clearly a reasonably capable man and he is doubtlessly surrounded by reasonably intelligent civil servants. It is not that he does not understand the issue, but rather that he doesn’t care about them. At the end of the day from his ideological perspective, any issue (social, cultural, political) can be dealt with by monetising it. By allowing the off-setting of a dwindling natural resource, he is permitting it to be managed and controlled through the market. He is applying the core freemarket tenet that everything can be better controlled and curated via the market and that the right to destroy ancient woodland is one that can be derogated to anyone with enough money in their current account to buy their way out of any kind of moral or social obligation. It is this that is at the heart of all these off-setting schemes, the notion that if you are rich enough, if you are powerful enough, you don’t have to make any awkward or inconvenient compromises for the greater good. Instead, you can simply buy your way out of any complex moral conundrum. We see here the pre-Reformation system of indulgences being rewritten for a secular generation.

It’s worth striking a cautionary note here. Despite this story being a headline in The Times, the Department of the Environment have said that it is extremely unlikely that it would actually happen in practice. So what is going on here?

It is interesting to note the context within which this news came out. It took the form of an interview with Paterson and The Times – the paper also used it as the subject of their lead editorial today. In the leader this idea was framed as an unfortunate necessity in the face of the requirement for more construction to meet the housing shortage. However ancient woodland covers less than 2% of the land mass of England and apart from in the Weald of Kent, relatively little of it is located in areas that suffer the greatest housing shortage. This leads one to question how far the establishment of a decent housing stock is being held back by the protection afforded to ancient woodland. Paterson and The Times appear to be setting up a rather disingenuous false dichotomy. So why has he come on the record about this at this particular moment? Well, according to the latest figures from the Nationwide House Price Index, house prices have risen 8.4% in the last year and the housing boom is greatest in central London, an area not known for its ancient woodland. As a result of this, there are voices within the coalition calling for a rise in interest rates, as well as criticisms of the government’s “help to buy” schemes. Given this, it seems far more likely that Owen Paterson is actually indulging in a little bit of back room knockabout with his coalition colleague, and trying to blame the potential new house price bubble on planning issues rather than fiscal policies enacted by his own government.

However, that’s not to say, the dismantling of the planning system is not high on the current government’s “to do” list. The Tory’s don’t have much luck when it comes to woods as the debacle of the attempted privatisation in 2011 showed- Theresa May had to buckle in the face of mass opposition to her plans, including from within the Tory heartland (Daily Mail and Telegraph where notable for their hostility to the idea). They are not very good at understanding the complexity of forests; under Thatcher, their preference was for conifer monoculture in rows as straight as a spreadsheet which viewed trees as long sticks of chlorophyll impregnated tax avoidance. Although given the current political context, it is unlikely that Paterson's latest forays into aboriculture will result in much, it stands testament to the wider perspective in which freemarket liberalism places our historic landscape.

Very well put; this is such an important issue. We have lost any sense of our traditional relationship with woodland,and it is very good it see an archaeologist refer to Oliver Rackham.

Your comment made me chuckle: 'We see here the pre-Reformation system of indulgences being rewritten for a secular generation.'

Although it looked like he was out, he is still talking isn't he? He was on the Today programme again. I wonder if he is really a Tory straw man: he says the unthinkable, everyone reacts appalled, they follow through with the slightly-less-terrible policy announcement.