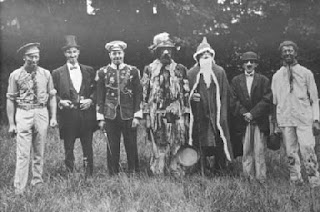 Once again, I've missed the opportunity of going to see a performance of English Acoustic's Collective exploration of the British mumming tradition Christmas Champions, though its still possible to catch the original broadcast for Late Junction on which it was based. There is also an interesting article from Folk World about its genesis.

Sadly, this year I won't be able to catch the Mummer's Play in Wantage on Boxing Day, which has become a bit of a family tradition in recent years. Its not such a tradition up North, where the plough stotts are more common. I'd like to think I'll catch the Goathland plough stots, but suspect we won't make it... (I am now wishing I'd brought the original 1913 pamphlet on the sword dances of Northern England by Cecil Sharp, which I saw in Fossgate Books today..doh!)
Posted by David Petts at 11:19 No comments: 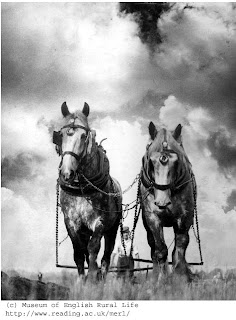 Jane recently came across the website for the brilliant Pitt Rivers Museum Inside England project. It won’t come as a surprise given my recent posts how interesting I’ve found this. Partly for the highly entertaining object biographies (Tylor's bewitched onion anyone?) and partly because its got me thinking about the history of collecting English folk/vernacular objects. As the name of the museum suggests, it was founded by General Augustus Pitt-Rivers, one of the founding fathers of British archaeology. His influence was greatest in the development of field techniques, but he was also important as one of the earliest field archaeologists to beging to place his practical archaeology in a broader theoretical framework. Not surprisingly for someone of his dates he seized upon Darwinism and evolutionary approaches. He was also dedicated to promoting and popularising archaeology and education more generally. He opened his private estate as a kind of educational pleasure ground and also built up collections of a wide range of objects and artefacts, often arranged typologically to illustrate the process of evolution through the change in form of objects. His early collections certainly included contemporary (ie 19th century) objects, and much of his early thoughts about material culture and evolution were worked through in his collection of firearms.

However, his collections of English material appear to have primarily use to illustrate and develop his theories and not particularly because he saw the wider value of treating England as a subject of ethnographic study, comparable to the fields of enquiry being developed abroad (particularly within a British imperial context) by British anthropologists.

I’ve not been particularly succesful in finding out more about the growth of the collecting British material in a broadly ethnographic context. I’d presumed that it must have had its roots in the early 20th century ‘folk’ revival, though I’ve not come across any details. I suspect that the early collections were largely put together by private individuals and did not reach museum collections for some time. For example, Hugh Massingham had a collection of various rural tools and equipment, which he put together in the between the 1920s and early 1950s when he died. However, the museum which they are now in The Museum of English Rural Life was not founded until the year he died. Beamish, the museum near Chester-le-Street dedicated to the local way of life was not founded until 1970, the same year as the Weald and Downland Museum. Many other major private collections of this kind of material is still finding its way into museums (such as the Harrison Collection) which has just been acquired by the Ryedale Folk Museum. I am sure there are also many small collections of ‘social life’ material in minor local museums, which are not presented or extensively promoted. Noticeably it was not until the post-war period that entire museum’s were dedicated to this kind of material. There is still no national museum dedicated to English folk life and culture, unlike Wales, where the St Fagan’s National History Museum is part of the National Museum of Wales. From my limited knowledge, this makes England relatively late to start taking the collection of indigenous objects seriously; for example in Sweden, the celebrated open air museum at Skansen was founded in 1891.
Posted by David Petts at 14:05 2 comments:

English Folk Culture (and a bit about Napoleon) 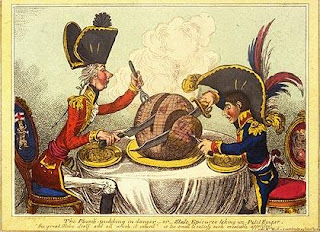 After my recent post on defining Englishness I've just come across the work of Sarah Barber who is developing research on defining English Folk Culture addressing some of the methodological issues in defining what we mean by 'folk culture'. I am not sure I entirely agree with some of the working definitions she is using, but its useful to see someone attempting to define 'folk' as cultural category of analysis(as opposed to what has now become an aesthetic genre). I think her attempt to define 'folk' as a relationship between the individual and the collective is a useful approach and avoids sterile arguements about what is inside or outside the folk tradition.

Its important to distinguish the search for a working definition of 'folk' as different from a working definition of Englishness (if such a slippery subject can be defined). There is no direct or easy equation of English folk culture with 'Englishness', which is often defined using exampla drawn from a range of sources from Imperial History, the Anglican church (bells and smells or happy clappy) and other criteria derived from middle class culture. Indeed the search for Englishness might be defined as a particuarly middle class neurosis. Folk culture, however, makes an overt reference to national identity and in many cases, particularly in the musical tradition, drawns on radical and republican discourses that are inherently anti-Nationalistic. For example, there is a fascinating tension in the depiction of Napoleon and the French Revolution in English folk song; compare the words of The Liberty Tree

It was the year of '93
The French did plant an olive tree
The symbol of great liberty
And the people danced around it
O was not I telling you
The French declared courageously
That Equality, Freedom and Fraternity
Would be the cry of every nation

Come listen every lord and lady, squire, knight and stateman,
I've got to sing a little song about a very great man;
And if the name of Bonapart should mingle in my story,
It's with all due submission to his honour's worship glory.
He fell in love with Egypt once because it was the high road
To India for himself and friend to travel by a nigh road,
And after making mighty fuss and fighting night and day there,
'Twas monstrous ungenteel of us who wouldn't let him stay there

Though to be fair, I wonder how many of the pro-Boney songs are from the Irish rather than English tradition. Its also worth mentioning my favourite lyric

My uncle, Captain Flanigan,
Who lost a leg in Spain,
Tells stories of a little man
Who died at St. Helene;
But bless my heart, they can't be true,
I'm sure they're all romance;
John Bull was beat at Waterloo!
They'll swear to that in France

ANYWAY....coming back to Sarah Barber's work, on far more trivial matter, I was pleased to see that one of her interviewees was on Joseph Porter drummer, lead singer and song writer of one of the words greatest bands, Blyth Power (named after a Class 56 diesel don't you know), possibly the only band to have ever written song about Graf von Tilley, the 30 Year War and the Battle of Breitenfeld!
Posted by David Petts at 11:43 No comments:

In the lands of the North, where the Black Rocks stand guard against the cold sea... 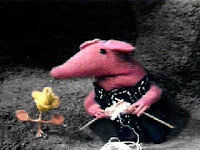 I've just heard the sad news of the death of Oliver Postgate, creator of Bagpuss, The Clangers, Ivor the Engine and Noggin the Nog. These programmes defined my early childhood, and that of almost anyone else who grew up in the 1970s. I've recently started seeing some of the modern children's programmes, and without wanting to come over all nostalgic, they don't hold a candle to this classic era of British television (though I do have a soft spot for In the Night Garden). Listening to excerpts from Postgate's programmes on the radio this mornign, what really struck home was their immense seriousness. They could be light hearted in places, but it was in their solemn attention to simple matters they were at their most childlike (in all the good senses of the word).
Posted by David Petts at 01:29 1 comment: