Call for Papers: Archaeology and Englishness 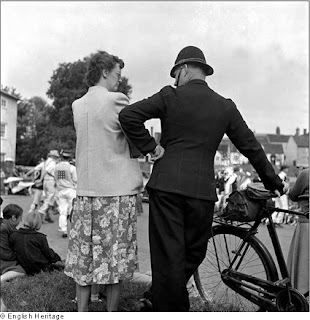 As Gordon Brown wrestles with how to promote a sense of ‘Britishness’, there are increased signs of revival of a sense of English identity, whether expressed through the resurgence in popularity of the English flag or increased call to celebrate St George’s Day as a national holiday. There is also an increasing popular literature exploring the notion of the ‘English’ and ‘Englishness’ often creating essentialised models of the concept (e.g. Ackroyd 2002; Gill 2007; Paxman 1999).

However, whilst other discipline, such as art history, literary studies and geography have long treated the notion of ‘Englishness’ as concept worthy of analysis and deconstruction, this has not been true for archaeology (cf. : Burden and Kohl 2006; Corbett , Holt and Russell 2002; Matless 1998; Pevsner 1956). Whether exploring the development of national traditions of scholarship or considering the way in which material culture is used to develop and maintain a sense of national identity, there has been a tendency for England to be subsumed within a wider British or imperial discourse (though there are some exceptions e.g. Johnson 2007). This session aims to restore this balance and consider the extent to which it is possible to recognise the notion of ‘England’ and ‘Englishness’ within archaeology.

It is hoped to explore a number of facets of the problematic relationship between archaeology and English identity including: 1/ Materiality and Englishness: the way in which material culture, structures and landscapes were used to create and maintain a distinct sense of English identity in past societies; 2/ The development of English traditions of archaeological scholarship and a consideration of the consequences of the development of ‘England’ as a distinct unit of analysis. Is there a distinct English tradition of archaeology or heritage management?; 3/ The use of archaeology to create discourses of ‘Englishness’ in popular culture. 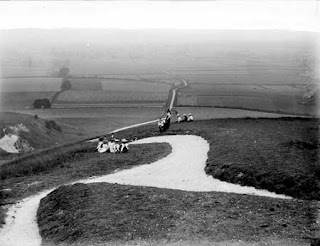 Nice little article about the 'scouring' of the White Horse at Uffington. It's a wonderful site. Although the Wiltshire Downs are better known, I have a soft spot for the Berkshire Downs, particularly the area from the White Horse along the Ridgeway to Wayland's Smithy and down to Ashdown House (which has also recently appeared in the news). I spent several weeks working for Oxford Archaeology on a very exposed hillside nearby excavating the area where a Bronze Age hoard had been found. I can still remember the way in which the curtains of rain would sweep across the landscape. I would watch the front of the shower of rain move over the field towards me allowing me to time my retreat to the site hut to perfection.
Posted by David Petts at 13:55 1 comment:

Sad to see that John Michell, New Age mystic, counter-culture guru and author of the View over Atlantis has died; particularly as only last night I was reading the large retrospective of his life and thought in the latest issue of the Fortean Times- you can see the FT obituary here. Although as a hard-nosed academic archaeologist I obviously have no truck with ley lines and earth magic, it's hard not to be seduced by the love of landscape which stimulated and pushed Michell’s work.

My own research is on the early medieval period and I have very little interest in prehistoric archaeology from an academic standpoint. However, I do have a profound Romantic attachment to prehistoric landscapes, particularly the Neolithic and Bronze Age monuments of the Wessex chalk downland. I think this stems partly from having grown up in Berkshire and in the course of my childhood been regularly taken to look at hillforts, barrows and megalithic monuments. My experience of this landscape was also stimulated by a number of books and television programmes. I remember particularly a BBC children’s drama called The Moon Stallion, which was full of typical 1970s children’s telly, cod mysticism and general New-Age jiggery pokery, and was, I seem to remember centered around the White Horse at Uffington, the Ridgeway and Wayland’s Smithy. I was also intrigued by the images in Kit William’s book Masquerade, which also had a Wessex- New Age vibe going on in it; I never had my own copy, but coveted those of my friends. As a consequence of this, I still have a close personal and emotional connection to these prehistoric ritual landscapes; always seen at their best I think in the depths of a winter. I don’t want to know about the archaeology, I just want to enjoy them.

ps: When I was writing this just now, I was absolutely convinced that the BBC series was called Sun Horse Moon Horse; which it turns out is actually the name of a Rosemary Sutcliffe book, about the White Horse, which I am absolutely convinced I've never read or even knew about before.
Posted by David Petts at 13:23 No comments: 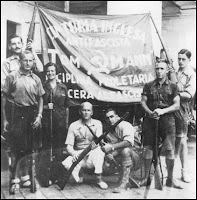 Those who scour the obituary columns may have noticed that Wing Commander Ernest Millington DSC, the last MP who sat in the Commons during WWII has just died. It’s not only this that makes him important; he was one of the few members of the short-lived Common Wealth party to become an MP. The Common Wealth party was founded by members of the Labour party and other radicals who disapproved of the Conservative-Labour electoral truce put in place during the War. The parties three key platforms were Common Ownership, Vital Democracy and Morality in Politics (which have rather a fine contemporary resonance).

Common Wealth was founded by Richard Acland, JB Priestly and Tom Winteringham. Tom Winteringham (the balding figure in the photograph)has long been a bit of a hero of mine; he commanded the British Battalion of the International Brigade in the Spanish Civil War before being wounded at Jarama. He broke with the Communist Party in 1938 and went on to take a leading role in running and training the Home Guard in Britain during World War II using techniques he’d acquired in Spain. Coincidentally, I’ve just started reading Hugh Purcell’s The Last English Revolutionary: A Biography of Tom Wintringham 1898-1949. All I need to do now is find an archaeological connection... (though Priestly was married to the archaeologist Jacquetta Hawkes).
Posted by David Petts at 03:38 No comments: 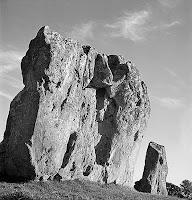 I’m currently reading a lot about the way in which archaeology was used in popular writing between 1918 and 1945. Whilst not surprisingly, the most high profile aspect of archaeology in the inter-war period was exploration in Egypt and the Near East, there was also a great interest in the British archaeology. The prehistoric monuments of Wessex loom large in much topographical writing at this time, such as the various series put out by publishers like Batsford. This was partly linked to a rise of rural tourism, as access to motorcars and the increased popularity of hiking and rambling meant that increasing numbers of people were exploring the countryside in a way not possible before. The cover art of many of the Ordnance Survey maps of the 1920s and 1930 reflect this increased interest in exploring the British landscape. Archaeology was also used by a number of writers of this vintage as a source of evidence for explaining and understanding the many problems seen as facing society, particularly the rise of industrialism and the changing face of rural life. Crucially much of this output was also focused on prescribing changes to society allowing it to meet these perceived challenges.

Regular readers of this blog will know that I am particularly interested in the work of John Massingham, one of the leading ruralist writers of the mid-20th century. He regularly used archaeology in his works, both as a source for metaphor and analogy, and also to shape his agenda for a revived agrarian society that was opposed to the mechanisation and depersonalisation of social relationships which he so hated in industrial society. One of his early books, Downland Man (Published I think in 1925), is almost entirely archaeological in content. In this odd volume, primarily focused on the prehistoric monuments of Wessex, he puts forward an entirely new chronology for prehistoric society, and crucially argues that a golden age of peace and prosperity was destroyed by the introduction of metalworking. He also promotes the notion, which was outmoded even at the time, of diffusionism; essentially that all the key changes in society were diffused out from a single point of origin, usually Egypt. Taking this diffusionist point of view he regularly attacked social Darwinism throughout this book (and much of his other writing), which he saw as a model for social progress predicated on conflict.

Massingham is particularly interesting, as unlike a lot of the ruralist and agrarian writers of this period, he actually had some archaeological training. After spending some time as a journalist (his father was the radical journalist Henry Massingham) he joined the staff of Grafton Elliot Smith, who was based at UCL and held hyper-diffusionist views (and indeed wrote the forward to Downland Man). It is clear from reading his books that Massingham was up to date with contemporary archaeological writing, such as the works of Vere Gordon Childe, and by the 1940s was in correspondence with W.G Hoskins, one of the key figures in English landscape archaeology after WWII. I’m hoping to do some more serious work on the archaeological dimension of Massingham’s work, which will form a paper in a session I’m trying to put together for TAG on Englishness and Archaeology. Pleasingly, I’ve found out that Massingham’s archives, including his archaeological notes, are held in the Museum of English Rural Life, in Reading, which was one of my favourite museum’s as a child.
Posted by David Petts at 14:07 No comments: 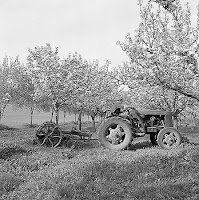 As a lover of landscape (and cider) I was pleased to read about new initiative by the National Trust to halt the decline in English orchards and attempt to revive them as part of the landscape. Over 60% of orchards have been lost since 1950, partly due to the impact of successive EU agricultural policies which rewarded over-production and encouraged farmers to put down as much land as possible to cash crops, and also due gradual erosion of orchard land around villages due to building and property development.
This project is something to be welcomed, as it is part of a larger move in current rural policy to maintain landscape distinctiveness. In the past, local landscapes showed a high-level of idiosyncracy. There were (and still are) broad regional patterns in the English landscape, such as the distinction between the broad zone of ‘enclosed’ landscapes running in a swathe across the country from the North-East through the midland plane to Dorset and the so-called ‘ancient’ landscapes found in the south-east and much of the west and south-west. Laid over these high-level landscape ‘provinces’ are distinct regional styles of hedge-laying, wall-making and gate building, as well as climatic and geological micro-topographies. This meant that England was a country of many distinct local landscapes.

It is some aspects of this landscape distinctiveness that is being recorded by English Heritage’s important Historic Landscape Characterisation initiative. This is an important project which will allow a base-line assessment of patterns of landscape to be assessed. This will allow the on-going survival of landscape types to be evaluated and allow archaelogists and landscape historians to begin to explore in detail the range of factors that make a particular local landscape distinct. It has its limitations though; its methodology is resolutely cartographical focused on recording the shapes of property parcels and ascribing broad functions to them. This is fine as far as it goes, but it is less useful in recording the many other factors that make a local landscape distinct, such as vernacular architectural traditions and field boundary types.
Posted by David Petts at 03:57 No comments: