Fantasia on a Theme by Thomas Tallis 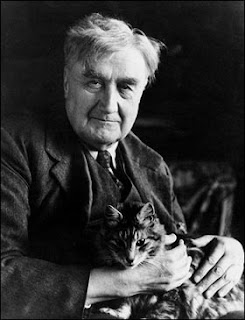 It's one hundred years since the first performance of Vaughan William's Fantasia on a Theme by Thomas Tallis. This has become part of the canon of British (or should that be English) popular classics (voted number 3 in its Hall of Fame by Classic FM listeners). An interesting article in last weekends Guardian contextualises the piece. What I think the article brings out is the role classical music played in the Neo-Romantic project. For me, the movement really flowers in the post-WWI period, as a direct reaction to the slaughter in Flanders and the twin perceived threats of fascism and communism. One of its key characteristics is the engagement in a metaphorical archaeology, digging into the past for powerful images and juxtaposing them, often anachronistically, with a more modern symbolic repertoire or stylistic techniques. A good example of this is Eric Ravilious' series of pictures of chalk hill figures seen from or next to railways. The Guardian article shows how in the first decade of the 20th century a series of British composers were carrying out musical antiquarianism. They were not only rescuing the rich tradition of Tudor church music (Byrd, Tallis, Gibbons, Taverner, Dowland), but also refashioning and using it, along side folk song, in new compositions. I find it interesting that most of the traditional narratives about the rise of Neo-Romanticism tend to sideline music focusing mainly on visual arts and to a lesser extent literature.
Posted by David Petts at 15:22 1 comment:

The Making of the British Landscape 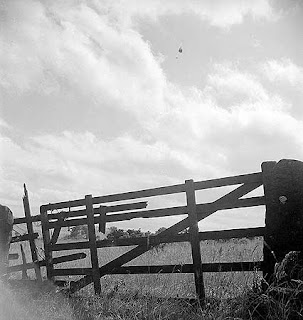 I'm now going to do that most difficult and irresponsible of things, comment on a book I haven't read. Once can't help but think of home-county vicars getting outraged by alleged smut on BBC drama series they haven't actually seen, but what the hell, you only live once. Francis Pryor's Making of the British Landscape was reviewed in The Guardian last week. As the review notes, the title is a riff on Hoskins' The Making of the English Landscape; I'd be interested to find out how much it really is truely British in scope (don't worry I promise I'll read it to find out). Raeding between the lines it clearly takes a much longer perspective than Hoskins. The latter's work barely grazed prehistory, whereas Pryor made his name as a prehistorian work on the important site at Flag Fen. Pryor's previous popular archaeological publications have always been far stronger in his home territory of the pre-Roman world and noticeably weeker once he hits the first millennium AD. This is by the by however; what has piqued by need to comment on this blog is the fact that according to the reviewer

He worries that landscape history is on the cusp of retreating entirely into academia, taking its findings and its insights with it. As a result, ordinary people – the kind who tramp the footpaths of Britain at the weekend for no other reason than they love to – will be thrown back on to a fuzzy subjectivism untethered to real knowledge.

Certainly, Hoskin's book was one of the few academic volumes that was both accessible and made a break through into the wider public perception and indeed made a television series based on his book. However, the high point of its popularity was probably the 1960s and 1970s and Hoskin's is no longer any kind of household name, and inevitably the tide of new research and discoveries made in the half-century since its initial publication have rendered its modern importance primarily historiographical. Nonetheless, I'm not sure I see landscape history 'retreating into academia', if anything its hard to go to National Park Visitor's centre, National Trust shop or Tourist Information Centre without being able to pick up dozens of pamphlets and leaflets about walks packed with information about the landscape through which they pass.

I wonder if Pryor is instead worried about the decrease in university extra-mural teaching. The popularising of Hoskin's work coincide with a highpoint in extra-mural/workers eduational/evening classes; he himself I believe was very involved in this kind of outreach. Much local research (parochial in the best sense)was carried out by groups which had their origin in such groups. Undoubtedly there has been a massive retreat in this kind of non-vocational adult education, due to recent government's heavily instrumental approach to adult learning, i.e. if it won't help you get a job its not worth funding. This has seen over the last ten years far fewer universities offering extra-mural learning, whilst the rise of educational bureaucracy (such as the joys of Aims, Objectives and Learning Outcomes) has meant that there are far fewer individuals willing to tackle all the paperwork required to offer this kind of learning experience. This has been a real tragedy.

However, I think, that limiting our views of the relationship between academic and popular archaeology to the world of evening classes is wrong. At the same time that there has been a decline in evening classes we've seen a massive rise in 'community' heritage projects mainly funded through the Heritage Lottery Fund; just taking my own area as an example, the Northumberlan National Park has its Coquetdale Community Archaeology project, the North Pennines AONB has just launched a new community archaeology initiative called Altogether Archaeology and there was a major joint project on recording prehistoric rock art run out of Durham and Northumberland county councils. All these projects have been fundamentally based on a large-scale community involvement, and have resulted in a large number of enthusiastic individuals in the region with a commitment to and good understanding of, archaeology in the landscape. Maybe things aren't quite as gloomy as Pryor suggests
Posted by David Petts at 13:17 No comments: