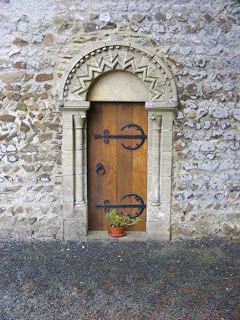 I've not really written much about my archaeological research on this blog so far. However, I'm getting ready to head of to Normandy in a few weeks to do a small-scale pilot project on early Christianity in the area (thanks to a grant from the Society for Medieval Archaeology), so I thought I'd include a little bit about my current plans (ie I've basically cut and paste a chunk from the grant proposal)


This project aims to begin mapping the evidence for Christianity in Western Normandy using archaeological and architectural evidence to supplement the sparse documentary material, with a view to developing a better understanding of the evolution of the Church in this understudied region. The Cotentin peninsula (forming the bulk of the modern Département of Manche- roughly coterminous with the diocese of Coutances) was a border region throughout the early medieval period. Whilst the initial evangelisation of the area was carried out in the late period by the bishops of Coutances (the Roman town of Cosidia) it is clear that the early church in the area was strongly influenced by missionary activity from Brittany and Ireland; for example, the monastery at Orval may have been founded by Columbanus. From the 9th century the area saw considerable political disruption following extensive Viking raiding and then settlement along its northern and western coast. The political and social unrest this caused saw it fall under the first the political control of the Kingdom of Brittany and then the Duchy of Normandy, though it was physically and politically peripheral to both polities. The ecclesiastical structure saw extensive disruption in the later first millennium; the see of Coutances fell into abeyance in 866 following Viking attacks and was not re-established fully until 1049. The politically peripheral nature of this area and the impact of Vikings mean that documentary evidence for the region before the 12th century is sparse and consists mainly of sources from outside the area. Any attempt to reconstruct the nature and development of the early church thus has to be able to fully integrate the archaeological and architectural evidence (cf Jarry 1998). Pre-Romanesque religious structures are known Querqueville and Portbail (Duval 1995), and a series of Christian Merovingian cemeteries are recorded in the antiquarian literature (Pilet-Lemière & Levalet 1989). However, existing scholarship on the 11th and 12th century churches in Normandy has generally focused on high-status and archaeologically elaborate structures (e.g. Mussett 1967: Grant 2005), particularly within the Norman heartland, east of the River Orne. There has been virtually no research into the survival of early fabric in the parish churches (though see Baylé 1999). However, recent field visits by the PI to the region have made it clear that early fabric does survive in many parish churches. Distinctive features include the use of herringbone masonry, petit appareil and round headed monolithic windows. A number of grave slabs of probable early date have also been identified.Research objectives. The aim of this project is through a combination of desk-based research and fieldwork to map the evidence for the early church in the Cotentin, allowing the study of the development of the religious life in the region to move beyond the limitations of the documentary evidence. The work will address the following questions:
i) How much evidence is there for Merovingian religious activity on later church sites?
ii) How was this activity structured? Was it centralised and limited to a small number of monastic sites or is ecclesiastical provision more decentralised?
iii) Can this be used to assess the extent to which Viking settlements really disrupted ecclesiastical activity in the region?
iv) To what extent does Romanesque and pre-Romanesque fabric survive in existing church structures?
v) How can this evidence be used to understand the development of the ecclesiastical organisation in the region following its integration into the Duchy of Normandy in the 11th century?
vi) To what extent can archaeology be used to explore the development of the church in an area with limited contemporary documentary evidence?

Methodology
The limited historical resources will be used to build up a corpus of contemporary references to churches in the region, which will be complimented by collating the archaeological evidence, mainly from 19th and early 20th century French journals (available in the UK at the British Library and Bodleian Library, Oxford). The fieldwork element of the project aims to map the extent of surviving Romanesque and pre-Romanesque fabric in the existing churches in the area. This will involve two phases of fieldwork. Phase I will comprise field visits by the PI to all churches within two sample areas: an area to the west of Coutances and an area in the far north-west of the peninsula (La Hague). The study areas have been selected to provide contrasting social, political and economic backgrounds in the study period, and to avoid areas of the region, which saw a high level of destruction of churches during the 1944 Normandy landings. Key features will be recorded by digital camera. No permissions are required at this stage.

Phase II consists of more detailed investigation and analysis of a smaller number of structures, selected on the basis of the results of Phase I. This will involve creating a more detailed drawn written and photographic record by the PI and a Research Assistant using a digital SLR camera, hand survey and some photo rectification. Analysis will define key phases of work and seek to identify and interpret early fabric. Once the physical evidence and textual evidence for the early church has been mapped, it will be used as a basis for an attempt to write an overview of the growth and structure of religious activity in the region. Permissions maybe needed depending on sites chosen; will be sought if necessary on completion of Phase I.
Posted by David Petts at 07:26

Hello, i am currently a student of Norman Studies in Caen University. I would have been very happy to read the results of your project. I hope you fell I love with Cotentin as much as I did.