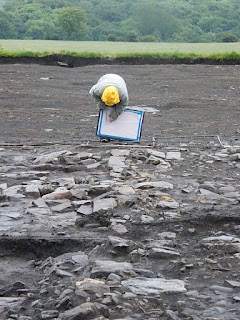 I’ve just done a broadcast on Radio 3’s Night Waves about the commercialisation of British archaeology. It’s only a short piece, and broadly speaking positive about the unexpected surprises that have arisen out of archaeological excavation that has been carried out as part of the planning system. It was not intended to be an in-depth overview and is hopefully a short prolegomena to a more considered exploration of this issue.
In a time when heritage is under increased threats from many directions, my piece could certainly be accused of being soft on these problems. Frustratingly for me, I wrote and recorded it before the ‘Bunnygate’ saga blew up, so I was unable to bring this into my discussion, so I want to use this blog post to explore some of the current challenges faced by archaeology in Britain today.

I’ll begin with ‘Bunnygate’; for those not in the know, this is connected to a speech given by Cllr Alan Melton, leader of Fenland District Council on June 21st at the 4th Annual Cambridgeshire Times/ Wisbech Standard/ Fenland Council Building and Design Awards. In it he launched an attack on the role of heritage and archaeology in current planning legislation, demonising it as hindering growth. It is worth repeating a key part of this diatribe

I can announce tonight, that from the 1st July. A requirement for an Archaeological dig/survey will not be required. The requirement will no longer feature at pre-app. Or form part of the committee agenda. With one exception, in local known historical areas, such as next to a 1000 year old church. Common sense will prevail! (Neale Wade springs to mind) The bunny huggers won’t like this, but if they wish to inspect a site, they can do it when the footings are being dug out.

Not surprisingly (except perhaps to Alan Melton himself) this piece of sub-Daily Mail oratory resulted in a massive backlash from the archaeological community. The most rapid response was a grass-roots campaign organised via Facebook with the other more formal and august archaeological bodies being slower to respond; some of these ‘official’ responses (such as that from the CBA including a fine performance by Mike Heyworth on Radio 4’s PM programme) were considered and to the point, others, such as that of the IFA were astoundingly anodyne suggesting a somewhat sclerotic organisational structure incapable of acting rapidly to address such incidents.

Now, it was rapidly pretty clear that Alan Melton’s threats was nothing more than a piece of blow-hard after dinner rambling aimed at golf-club cronies rather than a thought-through policy decision. Doubtlessly, local government officials has to hold back their anger and frustration as they patiently explained to Cllr Melton that he had no power to rewrite English planning legislation and that perhaps he should have a milky drink and have an early night. However, as a number of bloggers have pointed out, despite the ham-fisted way in which it was done, Alan Melton appeared to be following the sub-text of the CONDEM localism policy to its logical conclusion, i.e. local authorities should be able to tailor their planning guidelines to meet local requirements (which in his opinion appears to be to turn the Fenland into a housing-estate) and that in the current ‘difficult climate’ priority has to be given to economic growth (Discuss this amongst yourselves). It is unlikely that Melton was the official vanguard of the triumphant march of the Pickle-istas, but he clearly thought he was doing his dark master’s bidding.

Nonetheless, this sorry saga does emphasise the clear subtext of the localism agenda, which is that any kind of framework that might act to protect the environment (built or natural) is the malign expression of the Big State stifling the green shoots of growth. This can be seen in a series of recent proposals, such Grant Shapp’s Community Right to Build which would allow, in certain circumstances, the construction of rural housing without a specific application for planning permission,


At the other end of the scale the government also plan to ‘fast track’ planning enquiries linked to major infrastructure developments, such as road and rail schemes and have already abolished the Infrastructure Planning Commission. It is hard to see how ‘fast track’ can be translated as anything but ‘half-arsed’. Once again, the important systems of regulations that protect our environment are threatened.

This kind of chipping away of the planning system is dangerous because it is so insidious. There is no open broadside on PPS5, but instead a death by a thousand cuts, as the remit and power of these measures are slowly chipped away by the increase in ‘special circumstances’ in which existing legislation can be side-stepped or ignored. This makes it harder to fight against, as there is no single target on which those opposed to this process can train their guns. There is also the important related danger presented by the wholesale reduction of local government curatorial staff whose role it is to enact and monitor the existing planning sytem. Whilst the County Mounties have sometimes been criticised for failing to be rigorous enough in their policing of commercial archaeological excavation, it is not hard to see that reducing their numbers is unlikely to improve the situation.

In the face of this kind of ideological approach to the reform of local planning it is essential to keep a very close eye on forthcoming initiatives. It is easy enough to see the threat (no matter how half-arsed) in the ill-informed ramblings of the Alan Meltons of this world. It is harder to pick up on the small print of seemingly harmless governmental policies and mobilise and focus opposition to them. The government’s embarrassingly populist ‘Red Tape Challenge’ will be turning its jaundiced eye onto the Environment in September; this could prove very interesting…
Posted by David Petts at 14:29